We’ve got a huge update for you today with looks at DCA’s Summer of Marvel, Disneyland’s Summer of Star Wars, plus Project Stardust making the entire Resort neat and pretty.

We’ll stop in at the new Black Tap Craft Burgers for a bite and sip, check out progress on Star Wars: Galaxy’s Edge and more. We have a HUGE merch run today with tons of items to drain your wallets. So much to see in our latest park pictorial. ENJOY!

In competition of visitors from her big sister park, Disney California Adventure is loading up on AVENGERS this summer. There’s already a few Marvel adventures upon which you can embark.

Build Your Own Gauntlet

AVENGERS ENDGAME might have shown a fearsome gauntlet capable of blinking out existence with a single snap but at Disney California Adventure, Marvel and Disney have a different idea with what they hope will become the latest toy craze: Avengers Gauntlets. And this should only blink a few twenties out of your wallet, tops.

The popular souvenir sipper is back in stock once more!

Thor and Loki are back greeting guests near the Hollywood Pictures Backlot Stage.

Black Panther and members of his Dora Milaje guard are also on the prowl.

Of course, Captain America and Spider-Man can also still be spotted in the land. 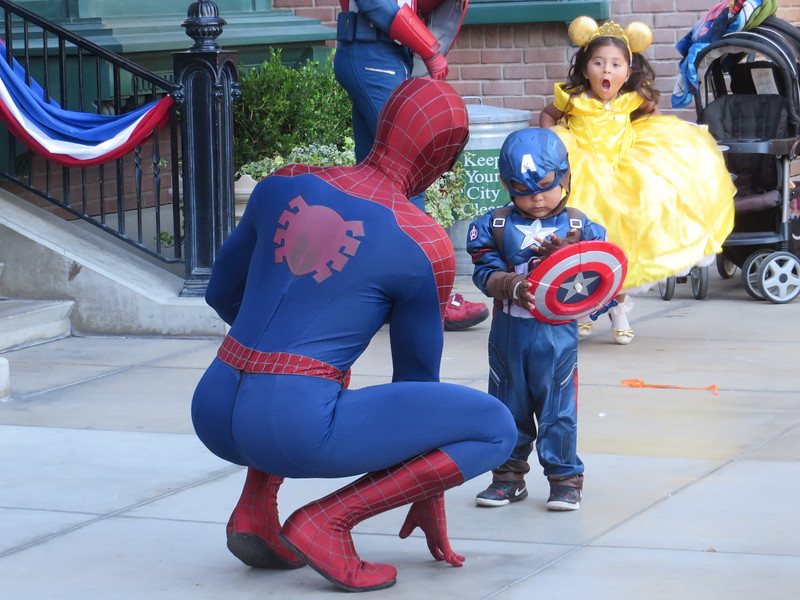 There’s a whole lot of Star Wars going on, not the least of which is the upcoming STAR WARS: GALAXY’S EDGE expansion.

Last week, Disneyland Resort launched a series of new policies as the Happiest Place on Earth prepares for unprecedented crowds for the STAR WARS: GALAXY’S EDGE expansion. Amongst those new changes were new restrictions on the kinds and sizes of strollers allowed into the parks. The new changes potentially make visits harder for those with more than one child in tow and so Disneyland Resort now offers a rental Double Stroller ($35 per day) in addition to their Single Stroller ($15 per day).

We still saw some pretty big strollers in the parks. Not sure if it’s lax enforcement or some other explanation…

It’s finally here. After several months of construction, the new Black Tap Craft Burgers & Shakes has opened its doors at Downtown Disney in Anaheim. The location brings with it a signature collection of CrazyShake dessert beverages, a tantalizing assortment of craft burgers, and even wine, beer, and cocktails.

The in-park views of the land haven’t changed much considering that in just over a month the land will be welcoming its first guests!

With grand opening so close, the Star Was: Galaxy’s Edge expansion (or unofficially Star Wars Land for the uninitiated) has unleashed tons of details about what guests can expect once they step foot in a galaxy far, far away.

After a brief refurbishment Critter Country’s Briar Pacth shop has returned with a refresh of its interiors.

A new vending cabinet has appeared outside of the shop.

Inside, the shop retains its charming rustic feel with its stone fireplace and carrots poking through the ceiling boards.

Hats and headbands are primarily what you’ll find in here.

This set of shutters is one of my new favorite places on a hot day, it’s a creative casing to cover the shop’s air conditioner.

New bric-a-brac on the shelves. The general theme with it all is sewing. Who knew Brother Rabbit had such a fine affinity for tailoring?

The “bug’s land” restroom is losing its tissue themeing as construction moves along to turn this area into a Marvel-themed land.

MORE INFO: News and info about the Marvel-themed land

The north-facing walkway at the Carthay Circle Theater has been converted into expanded lounge patio space. It’s quite nice and makes logical use of otherwise wasted space.

Rita’s Baja Blenders is looking positively radiant. The new orange paint is super intense even under the gloomy morning sky.

Inside Out: Emotional Whirlwind is coming along.

MORE INFO: Pixar Pier will bring an Emotional Whirlwind in 2019

The giant plate on the Camp Notices advertises PICNIC AREA. I asked Cast Members what that was about and they shrugged and said that there’s benches inside if you want to eat.

New walls up inbetween the dining areas for Refreshment Corner and Jolly Holiday. I wonder if they’ll re-slope the space to make it wheelchair accessible.

With limited space on the dining terrace, the piano has moved indoors.

Time Castle is still buried. Seems like the plaque could use a good shining.

Benches in front of the castle are getting paint to match the new color scheme.

Expect wider walkways and smaller planters here once walls come down. The Donut vending location has also been removed.

A new walkway has sliced through the former planter leading right up to the Plaza Inn.

Still some curb left to re-slope on the Tomorrowland side of the hub.

Walkway into Adventureland also remains constricted. Seems like they’re removing the small planter that was in the middle of the walkway.

Water fountain is working again in the hub.

Something coming here or just needing some new brickwork? Or both?

No new marquee yet for Adventureland entrance, it’s expected to arrive before May 31.

We hear the wait board will actually be returning. Still nothing yet.

A tree is missing, I think? A really big one?

Storybook Land Canal Boats and Casey Jr. Circus Train are down for the count. I wonder if they’ll reconfigure those respective queues? Perhaps a solution that allows the boats to remain open during parades?

The space around the newly removed planter is already being used as extended queue space for Peter Pan’s Flight.

The Fairy Godmother was charming guests in Fantasyland.

Alien Pizza Planet showing no signs of progress on its new exterior just yet.

Walls still surround Path of the Jedi, should be interesting to see if they remove the planters/extended queue from this area to open it up even more.

The Disneyland Rose is such a beautiful bloom.

The churro cart in front of the Haunted Mansion has relocated.

It can now be found at the back of the new Stroller Parking area closer to the attraction exit, overlooking the Rivers of America.

A roaming ODV cart has also been setup even closer to the Haunted Mansion exit.

Stroller Parking in front of the Haunted Mansion seems to be working well.

Hunny Apples, too cute to eat!

Sad that the fishing bear here never came back to this waterfall behind Pooh Corner. You can still see the stump of concrete that held his base.

Walkway seemed wider than I remembered it at the exit for Pooh. Not back here much.

This Cast Member looking out on the river reminded me of the old Tom Sawyer Island poster.

Line for Salt & Straw was coming out of the door. We wondered why they wren’t using the extended queue on the side of the building…

Cinco de May in Downtown Disney.

The new dining area at Disney’s Grand Californian Hotel & Spa is coming along.

Some great new socks showing up on shelves.

This “it’s a small world” Musical Nutcracker is so cute!!

Guardians of the Galaxy merch.

That coffee mug is full size. That is a Jumbo Dumbo!

We had the opportunity as guests of a Disney Parks Blog event to check out Pop-up Disney! A Mickey Celebration at Downtown Disney. On our voyage into the former ESPN Zone, we found a delightful and bright space ripe with literally countless photographic opportunities.

MORE INFO: Inside and In-Depth: POP-UP DISNEY! A MICKEY CELEBRATION at Downtown Disney

Mickey’s PhilharMagic has come to the Disneyland Resort. Taking over the Sunset Showcase Theater at Disney California Adventure, this Walt Disney World transplant brings a familiar musical whimsy with Donald Duck, Mickey Mouse, and a host of Disney characters taking us on a musical adventure.

As we gear up for a busy summer with the opening of Star Wars: Galaxy’s Edge, Disney will be bringing back fan-favorite fireworks spectacular DISNEYLAND FOREVER. The popular fireworks show will replace the current MICKEY’S MIX MAGIC show that kicked off in January as part of the Get Your Ears On – A Mickey and Minnie Celebration.

GET YOUR EARS ON

GET YOUR EARS ON – A Mickey and Minnie Celebration is a new festival at the Disneyland Resort to celebrate the 90th Anniversary of everyone’s favorite mouse duo. The #Mickey90 celebration comes to an end on June 6, 2019.

MORE INFO: PICTORIAL: Disneyland celebration invites you to GET YOUR EARS ON with new offerings

With the June 6, 2019 end-date in sight, there’s not much time left to enjoy the limited eats, treats, and sweets celebrating Mickey’s 90th birthday!

Disneyland is currently offering several ways to save a little money and visit the Happiest Place on Earth. Each have various restrictions so you’ll want to find the one that works best for you.

If you are looking for a way to help support the site so we can continue to bring you more info about the mouse, feel free to browse our TeePublic Store! Aside from tees, you can also find coffee mugs, phone & laptop cases, and more!

MISS AN UPDATE? SEE ALL OF OUR PREVIOUS PICTORIALS HERE!